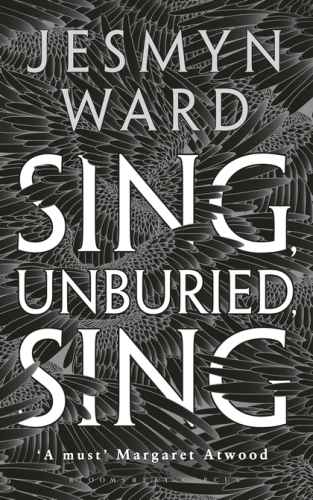 Jojo is thirteen years old and trying to understand what it means to be a man. His mother, Leonie, is in constant conflict with herself and those around her. She is black and her children’s father is white. Embattled in ways that reflect the brutal reality of her circumstances, she wants to be a better mother, but can’t put her children above her own needs, especially her drug use.

When the children’s father is released from prison, Leonie packs her kids and a friend into her car and drives north to the heart of Mississippi and Parchman Farm, the State Penitentiary. At Parchman, there is another boy, the ghost of a dead inmate who carries all of the ugly history of the South with him in his wandering. He too has something to teach Jojo about fathers and sons, about legacies, about violence, about love.
~~~~~
Jesmyn Ward is a previous winner of the National Book Award, a recipient this year of a MacArthur genius grant, drawing parallels with fellow NBA winner and MacArthur grant awardee Ta-Nehisi Coates; whereas Coates’ work on America is largely in the medium of nonfiction, Ward’s meditations on the country are through the medium of fiction.

Ward’s latest, Sing, Unburied, Sing, takes the American roadtrip, and twists it ever so slightly. Not only is this a roadtrip of a mixed-race family to meet their father on his release from the state penitentiary, there are also ghosts and supernatural forces mixed up in things, as well as drugs and intergenerational familial relations and resentments. Ward doesn’t resist complexity here; the whole book is centred on the tangled morality and reality created by the white supremacist, patriarchal state. Sing, Unburied, Sing doesn’t provide a simple moral solution, or any solutions at all, to the various problems which lie at its heart. Ward doesn’t seem interested in that so much as in using her art to lay out the problems, letting others look for solutions.

Sing, Unburied, Sing isn’t a political manifesto of a novel, though. Ward has a lot of heart in here; the characters are absolutely brilliant. Leonie’s tangled relationship with her children, with her boyfriend, with her parents, with the parents of her boyfriend, and with her past, make her a complex and difficult character. The tensions she feels are beautifully conveyed, even when the reader doesn’t wholly empathise with her reactions. Similarly, Jojo’s maturation coinciding with his resistance to Leonie’s attempts to be a mother are beautifully conveyed; Ward somehow manages to get inside the psychology of a teenage boy fantastically, and really brings him to life, making his strands of Sing, Unburied, Sing incredibly powerful. The contrast between the way the two characters see the same events, especially at key emotional moments, is absolutely brilliant, and the alternating viewpoints really bring that out.

The rest of the cast are a little thin; this is especially true of Misty and Michael, Leonie’s friend and her boyfriend, but also of Mam and Pop, Leonie’s parents with whom she and her children live. Sing, Unburied, Sing gets into their heads a bit, especially in the case of Pop, whose past in the same pentitentiary Michael is being released from forms a key lynchpin of the novel, but not enough to really make them characters. Ward does this even more so with Michaela, or Kayla, Leonie’s daughter; while a toddler has limited interiority, the level displayed by Michaela seems to shift repeatedly across the course of the novel.

So far, this review has not touched on the plot. Sing, Unburied, Sing isn’t a plot-driven novel; in some ways, Ward has written a kind of partial biography of these characters, and as such, there is less a plot than a series of connected events that form a life. These moments are powerfully written and joined by some beautiful, elegaic writing; both the darkness and light of family are exposed, and some of the absurdities of road trips, as well as their dangers, are made clear by Ward. This is at times a very visceral novel, both emotionally and physically, and it is in these moments that it really grips the reader.

There are two mysteries threaded through Sing, Unburied, Sing; one, which has an obvious conclusion to the reader far before it is revealed to the characters, is entangled with Pop’s incarceration at Larchman, and his attempts to protect a fellow inmate, Ritchie. The other is the murder of Given, Leonie’s older brother, by Michael’s cousin; this gives rise to a complex relationship between Michael and Leonie, as well as Leonie’s family. Both are founded on American white supremacy, and Ward doesn’t shy away from the manifestations of that in personal interactions or the state itself; the long shadow of slavery and Jim Crow are never far from sight in the novel.

In Sing, Unburied, Sing, Ward has given us an artistic reaction to American white supremacy; and it is a beautiful, powerful, and intelligent, damning reaction. I highly recommend it, and afterwards, her Guardian essay about raising a black son in America. Vital reading.

If you would like to support these reviews, and the trans community, and have a chance at winning a book, all at once, please take a look at this post requesting donations or activism to trans causes.

By Intellectus_Speculativus in Review on December 5, 2017.
← The Fisher of Bones by Sarah Gailey Mumbo Jumbo by Ishmael Reed →