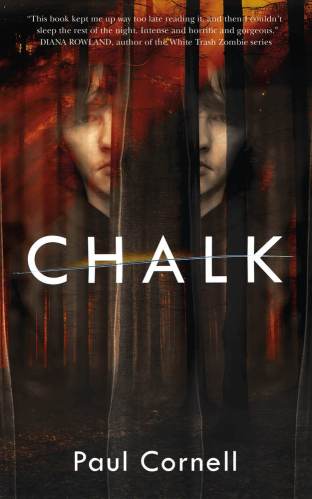 Andrew Waggoner has always hung around with his fellow losers at school, desperately hoping each day that the school bullies — led by Drake — will pass him by in search of other prey. But one day they force him into the woods, and the bullying escalates into something more; something unforgivable; something unthinkable.

Broken, both physically and emotionally, something dies in Waggoner, and something else is born in its place.

In the hills of the West Country a chalk horse stands vigil over a site of ancient power, and there Waggoner finds in himself a reflection of rage and vengeance, a power and persona to topple those who would bring him low.
~~~~~
Paul Cornell is perhaps best known for his work on Doctor Who, both as a novellist on the New Adventures years and as a TV writer for New Who; although his brand of urban fantasy, showcased in the Shadow Police and Lychford series, is also gaining popularity. Last year also brought us Chalk, out from Tor.com, a very different beast…

Chalk is a straight up rural horror novella of a very particular era in British history. Cornell conjures Wiltshire in the 1980s very powerfully, with the grip of Thatcher on a fraying, impoverished nation, with the failing old order and aristocracy, with the rising punk youth. He also conjures a sense of the ancient in conflict with the modern; the old order rising in new forms in conflict with the new, although he very much does not map these onto political or pop cultural movements neatly. Instead, the zeitgeist is a powerful force wrestled over by modernity and the ancient, as the old seeks to influence the new in dark and bloody ways.

This is a dark and brutal little story; Chalk starts with a violent sexual mutilation of a teenage boy by a group of others, and only gets more graphically violent from there. Cornell continually blurs the lines between the real and the metaphorical throughout, so that the brutality is at once incredibly close, and slightly distanced by the possibility of Waggoner lying; the reader is invited repeatedly to question the truth of the narrator’s account by the narrator himself, in a curious approach to the story that is incredibly effective. Everything is a set of different narratives seen differently by different people; is this just the self-justifying story Waggoner tells himself later, or is Andrew telling the truth about what happened throughout? The subtlety of that question and the openness of its answer, because Andrew Waggoner is our sole narrator and viewpoint, is central.

That ambivalence also extends to the characters of Chalk. This is a viciously honest book: no character is innocent and in the right; everyone is, in their own way, stained. Andrew commits violent, vile acts, including sexual harassment (which he, reflecting on his past, describes as such); but he is also the victim of vile and violent acts, which do not justify his own acts. His tormentors are in similar positions. The whole novella is an exercise in awful people doing awful things for awful reasons; Cornell makes it somehow compelling despite there not really being a single character to root for. A couple of the women of Chalk, namely Angie and Elaine, come closest to being sympathetic characters; but Elaine is too much a cipher acted on by others but barely herself acting, and Angie is too objectified by Andrew to really grow into her own character.

If you found this review useful, please support my ability to write by contributing to my Patreon.

By Intellectus_Speculativus in Review on December 28, 2017.
← The Only Harmless Great Thing by Brooke Bolander Her Body and Other Parties by Carmen Maria Machado →