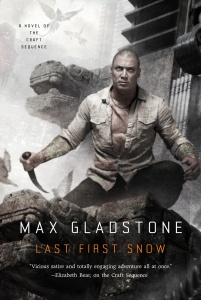 Max Gladstone is the author of the amazing Craft Sequence, the first-or-fourth installment of which came out on Tuesday, titled Last First Snow. Since Dr Liz Bourke turned me on to the series, back with Three Parts Dead, I’ve been a huge admirer of the diverse, brilliantly-executed, fascinating, urban economic-legal fantasy that Gladstone has been writing, so I jumped at the offer of a guest-post from the man himself when offered it.

On asking Twitter what the topic of the post should be, the overwhelming response was “bees”; as an alternative, I asked about Gladstone’s choice to write from marginalised viewpoints (most notably, a disabled trans woman of colour in Full Fathom Five). It turns out that, as only a writer of his calibre could, he managed to meld both topics into one in this essay…
~~~~~
I suspect most people feel more or less the same when they’re being chased by bees.

So, no shit, there I was, in rural Anhui province, in China. After a relatively sedentary first year in the country, I’d taken up running, inspired and a bit intimidated by my roommate Wyatt, fresh off the cross country team at college. I never reached Wyatt’s lofty peak of fitness, but every other day I’d dutifully don shorts and sneakers and plod out through the canola fields behind the school, over the little ridge past water buffalo and cabbages, and carry the circuit around ’til I reached the main road again.

That spring, the canola fields bloomed into a carpet of yellow, and I discovered that the local beekeepers brought their hives to gather pollen from those flowers. Right along my running path.

Now, I’m not allergic to bees, but I had some bad bee-related experiences as a kid, and I’ve been nervous around the critters ever since. But I knew better now, I told myself. Bees smell fear, and a smooshed bee releases a pheromone-type chemical that attracts other bees. So don’t be afraid, and don’t smoosh bees, and you’ll be (hah!) fine.

The first day after the hives arrived, I breathed through my nose, and ran right past. A few bees buzzed around my head for a while, but the swarm did not descend. I’d grown as a human being! I’d survived!

The second day, I ran past again, and again the bees showed little interest. By the fourth run, the whole deal seemed old hat.

My fifth run took place on one of those hot and viciously humid days I’d had too much of growing up in Tennessee. I didn’t want to run, or do much of anything except lie in the shade. I even showered, thinking, it’s cool, I’ll skip the run today. But then Wyatt came back from his run, smiling and cut and flush with health, and, fine, dammit, on go the shorts and shoes and out the door go I. Down the hill. Out the front gate. Off the main road, and through the canola fields.

At first a few buzzed over, turning tighter circles around my head than they had before. That’s fine. I’m cool. I’m cool.

More came, their wings a high-pitched whine in my ears. Ten, maybe. This is, um. My skin’s crawling. Twenty. Forty. Bees land and wriggle in my hair. By reflex, I try to brush them away—and by accident, smoosh.

Have you ever heard two dozen hives notice something all at once?

To me, they sounded like Hells’ own Angels revving up to kick my ass.

The next, it can’t have been more few seconds, felt like much longer. I’ve never run that fast in my life, and I was running ahead of a dust storm made of bees. I was stung. A lot. I couldn’t run faster than they could fly. Just as the cloud was about to pass me, I dove off the road into a bush, crouched with my head covered, and hid.

This makes no sense—I know it makes no sense—but I remember the bees flying right past me down the road, in a coherent black phalanx. Maybe the Bee Goddess took pity. Maybe I’m making that bit up. I don’t think I am. I was in, at the time, let’s dignify it with the expression “a heightened state of consciousness.”

When the bees passed by, I picked the dead ones out of my hair and their stingers out of my skin. I limped home, tended my welts, and found an alternate running trail until the hives moved on. I did not die. Had I been allergic to bees, I would have been in trouble—but I was just stung, and afraid. Probably people with more traumatic bee experiences in their past might have been more afraid; probably people more hard-core than I would have been more level-headed about the whole affair. But I suspect that (controlling of course for allergies) different folks’ experience of that situation would have fallen along a psychological axis that isn’t much dependent on, say, their sexual orientation, gender identity, or racial background.

We live in a cool moment in fiction, especially speculative fiction: people are standing up and demanding to see more of themselves in books, and taking issue with stories that get their experiences wrong. As someone interested in justice, and as someone who has always read stories from a wide range of authors, backgrounds, and cultures, I love this moment. I’m seeing more books drawing from more wells than I ever remember. These conversations and developments draw us closer to a true literature of liberation. (Or ‘escape,’ if you’d prefer.)

So what can I do to help, as an SF practitioner? Privilege, I have it—my only competition in the Privilege Olympics is my demographic clone who happened to grow up capital R rich. For Christ’s sake, I’m a straight, white, cissexual, heterosexual, monogamous Yale man. Cole Porter wrote whole musicals lampooning people like me. I can—and do—boost, and promote work I love by people the system slants against. I can be an activist and advocate. But I’m worse at all that other stuff than I am at writing books. And if I did all that other stuff better, but focused my books on people who look, speak, screw, and believe exactly like I do, well, I’d be using my greatest powers—skills I’ve spent my whole life developing—to be part of the problem. And to make matters worse, I’d be writing about a world that does not exist, a fantasy within a fantasy. Young writers are told time and again in this business that they only get one big conceit per novel, and I’d rather mine be “wild fantasy magic with dragons and stuff” than “depressing monoculture.”

So, what does that leave?

Well, let’s start with what I can’t do. Where I am now, being who I am, I can’t write Ralph Ellison’s Invisible Man. I can’t write Song of Solomon. I haven’t lived the life to write those books. I could try—maybe—but it would take immense research, enormous compassion and negative capability, heroic effort, very patient beta readers, and I’d still probably screw everything up.

It helps that I like writing thriller plots—setting characters tense challenges of the “find the murderer” / “stop the disaster” / “figure out the truth” variety, and chasing them around the proverbial map. Those plots aren’t that different from a swarm of bees, if you think about it: stakes are high, consequences immediate, and as a result, differences between people tend to get compressed. It’s still, of course, important to get those differences right—choices made under pressure reveal and unwrap character. But immediacy helps bridge the gap between people, too. The swarm of bees, the ticking bomb—they’re not universal, but they help.

When I was first spinning the ideas that became Three Parts Dead, I read some heated discussions online about how few black women main characters there were in fantasy; those informed Tara, no doubt. Thinking the challenge through I felt like I was up to writing a young black woman who was brilliant, ambitious, desperate to get out of her hick home town, confronted with an overwhelming job—I have personal experience with most of those things, and as I embroiled her in a thriller plot, I felt more confident about writing the parts of her character my experience didn’t cover. That’s not enough, but no one book is, or can be, enough. I can write someone awesome, though, and hope it helps.

The same approach informed my development of a non-anglo culture in Two Serpents Rise, melding authoritarian dynamics I knew from my time in China and environmental issues from Los Angeles and religious and cultural signifiers from Mesoamerica. Ditto for Full Fathom Five, in other ways. And by Last First Snow, my most recent book, I found I’d filled a world with people who were not me!

None of the folks in my books “just happen” to be the people they are—I research, I listen to people, I beta my manuscripts widely, I develop compassion and negative capability, I ask, I listen. I work hard to get right the experiences that are beyond mine. I hold my books up to the light when they’re done, and try to ask, honestly: what am I doing here? When I build a character who differs from me in some significant facet, I try to respect those differences; if I don’t, I’m just being a bad writer.

Forty years after the God Wars, Dresediel Lex bears the scars of liberation–especially in the Skittersill, a poor district still bound by the fallen gods’ decaying edicts. As long as the gods’ wards last, they strangle development; when they fail, demons will be loosed upon the city. The King in Red hires Elayne Kevarian of the Craft firm Kelethres, Albrecht, and Ao to fix the wards, but the Skittersill’s people have their own ideas. A protest rises against Elayne’s work, led by Temoc, a warrior-priest turned community organizer who wants to build a peaceful future for his city, his wife, and his young son.

As Elayne drags Temoc and the King in Red to the bargaining table, old wounds reopen, old gods stir in their graves, civil blood breaks to new mutiny, and profiteers circle in the desert sky. Elayne and Temoc must fight conspiracy, dark magic, and their own demons to save the peace–or failing that, to save as many people as they can.